This 200 page pictorial history of Fremantle's port begins with its dangerous days of unsheltered anchorage. It finishes in 2011, when a $250 million dredging program allowed the then biggest of the big ships into the Inner Harbour. The safe harbour created by C.Y. O'Connor over 100 years ago lives on.

See the Battle of the Plans to develop a decent port. See a struggling colony propelled into growth through a gold rush. Observe the genius of engineer C.Y. O'Connor as he builds a harbour inside the Swan River. Watch the ships grow in size, and the thousands of lumpers who have to handle them. Note the VIPs and the fancy ship interiors. Appreciate the role of the port, both in peacetime and in wartime, moving men and materials across the world.

Countless journeys have been made to and from Fremantle Port, on trails often no wider then a deck of a ship or the width of a railway line. This book contains just some of the stories thus created by that travel. 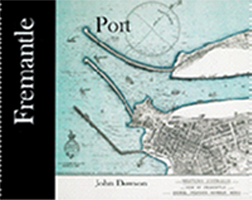