Initially, in 1914, the men of Australia did not need much encouragement to go off to war. They volunteered in droves. When war broke out, the Australian Army had a strength of 45,645. But the troops promised to Britain would have to be a volunteer force, as the Defence Act only provided for compulsory service within 'Australia's borders. By the end of the war, with two nail biting conscription referenda along the way, 416,809 had enlisted from a population of fewer than five million.

The Great War was difficult, fought in foreign countries against well-equipped enemies. The physical and mental toll proved enormous. The damage caused echoes down the years and today, 100 years later, the effects are still felt. In killing such large numbers of able bodied men, and women, the war prevented them from having their own families and generating a stronger Australia. The best tribute we can pay to those who served is to remember them.

This centenary commemorative souvenir shows the enthusiasm, vigour, and dislocation of Australians going off to war. It is respectfully dedicated to all those who have served, and those who continue to serve their country. 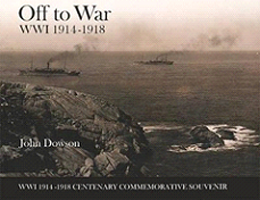