This dictionary tells the story of Western Australia's early Warders and Gaolers during the period 1829-1879. While a number of small gaols and lock ups had been established in the colony, it was not until the arrival of the first convicts in June 1850 that the prison system in Western Australia began to employ an increasingly large number of prison officers. During the period 1850-1868, 115 warders, recruited in England, arrived in the colony on convict and emigrant ships.

The Convict Establishment at Fremantle was the principal prison in the colony. However, many of the warders were to work at convict Hiring Depots scattered throughout the districts; and at isolated road parties, accompanied by their wives and children. The reader will be able to discern from the dictionary, the relationship between prison officer and prison officer; prison officer and prisoner; aggravated by the physical boundaries of the prison wall and work party, or the isolation of the bush. 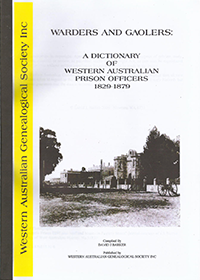