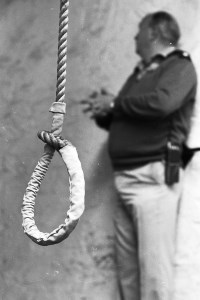 Perth Gaol opened in 1856, and until 1888 it was the major focus for legal executions by hanging in the State.During the early days of settlement in Western Australia between 1829 and 1855, legal executions of convicted criminals appear to have taken place in various localities including York, Perth, Fremantle, and Canning River. In some cases, prisoners condemned to hang were executed at the spot where they had committed the crime.

In 1867 the Imperial Convict Establishment at Fremantle was renamed Fremantle Prison, and in 1886 it was handed over to the colonial government as a major high security prison. One of the first things the government did was to build a gallows there in 1888. This became the only place of legal execution in Western Australia between 1888 and 1984. During that time 43 men and 1 woman were hanged there.

The last person to be hanged at the gallows in Fremantle Prison was Eric Edgar Cooke, in 1964. Cooke was a serial killer, and although charged with, and tried for, only one murder, evidence plus his own voluntary confessions, indicate that he killed a number of others during his three or four year reign of terror in the suburbs of Perth.

Most hangings at Fremantle Prison were carried out on a Monday morning at 8.00am.

Prior to this time, the hangman was responsible for seeing that a number of things were in order. These included: testing the trapdoor mechanism functioned properly; eliminating any potential for the rope to stretch; and determining the length of rope needed to properly execute a condemned person, using calculations accounting for their height, and their weight.

On the day of the execution, the condemned person was woken around 5.30 am. He showered, and was given breakfast. He was then transferred from death row, located in the New Division cell block, to a cell in the Solitary Confinement block, where he was kept under constant surveillance. He was allowed the services of a priest or an equivalent, and offered the option of a glass of whiskey.

At the allotted time the prisoner was escorted to the gallows with his hands and feet secured in leather shackles and his head covered by a cloth hood.

The formalities of the ritual were strictly observed. Once everything was in place the event happened very quickly. The time from leaving the condemned cell in Solitary Confinement to the actual hanging was around 60 seconds.

INFORMATION FOR STUDENTS
Capital Punishment - For and against

If you are studying this subject and need information about the arguments for and against, we suggest that you visit either your school library or your local library. Here are some suggestions about searching for texts on the subject-

For information on the topic generally look in your library collection under the Dewey Decimal subject classification number 364.66. Also you may look up the following subjects in the library catalogue to see what books and other materials on the topic are held in the collection:

Look up the subjects in your library’s encyclopedias, usually kept in the Reference section & not for loan.

Ask at your school or local library if they have any of the books listed below. Your local public library will probably have the listed encyclopedias in its reference collection. If not, try other encyclopedias on their reference shelves.

Most of the books listed below are available through your local public library. You may have to ask the librarian to obtain a title for you on inter-library loan. In some cases it could take a number of weeks before the book becomes available for you to use, so do not leave your assignment until the day before it is due for handing in. Plan ahead so you have resources in plenty of time for you to make use of them.

The Australian Encyclopedia (1988) (check in the Reference section)

The Death Penalty: Opposing Viewpoints (1986) edited by Bonnie Szumski (and others)

End of the line: capital punishment in Australia (1994) by Michael Victory (this has an excellent chapter on the arguments for & against)

For and against: an anthology of public issues in Australia (1989) edited by R. Giles