The Swan River Colony marked a new chapter in Britain’s colonisation of Australia. The two main colonies of New South Wales and Van Dieman’s Land had at first been populated primarily by convicts. The Swan River Colony, founded in 1829, was to be something different, a colony for free settlers.

During the first year of settlement the Swan River Colony struggled on a number of fronts. Initially too many people arrived too quickly, and then there were too few. Soon the population began to decline as disheartened settlers left for the eastern colonies. Between 1833 and 1834, twelve ships carried 1358 passengers away from the colony, leaving a total population in the Swan River settlements of less than 1400.

The settlement suffered for many years. During 1843 and 1844 a major depression hit the colony. Hampered by the lack of transport, administrative and communications infrastructure, plus a severe shortage or workers, the growth of the colony’s pastoral and agricultural industries came to a halt. At this point the future of the Swan River Colony looked bleak.

In 1847 the York Agricultural Society, a group of wealthy pastoralists, petitioned the colony’s Legislative Council to consider the introduction of convict labour. They argued that convict labour would stimulate the economy and open up the state to farming and development. Many of the settlers believed that the introduction of convicts went against the principles of free settlement under which the colony had been first established. In particular the settlers who lived close to or in the main settlements feared the ‘convict stain’, the crime and violence they felt convicts would bring to the colony.

The British Government however were keen to find a solution to the overcrowding of English prisons. Britain quickly agreed to send 100 prisoners in the last stages of their punishment to the colony. A dispatch was sent to the governor and on 6 November 1849 the West Australian Government Gazette published the official announcement that the Swan River Colony had been ‘constituted a penal settlement’. 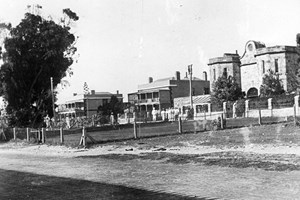