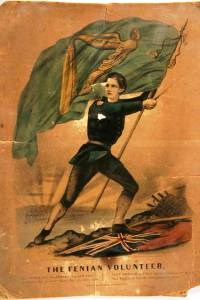 John Boyle O'Reilly was an NCO in the 10th Hussars (the prestigious regiment of the Prince of Wales) when arrested in 1866 for assisting fellow soldiers to join the rebellious Fenian movement. Found guilty at his court martial, his death sentence was commuted to one of 20 year's penal servitude which automatically meant transportation (anyone sentenced to seven years or more was transported).The Fenian movement, or Irish Republican Brotherhood, was a secret society that flourished during the 1860s. Its activities included an armed rebellion against British rule in Ireland, which failed for a number of reasons. In 1865 hundreds of men were arrested in Ireland on suspicion of complicity. There were two elements amongst the men charged and convicted: those who were civilians, and those who were currently serving in the British military services. The civilian element were treated as political prisoners, whilst the military element were treated as ordinary criminals. In 1869 the civilian element were granted clemency and freed, whilst such consideration was denied the military element (Erickson pp.115-156).

He sailed, along with 280 other convicts — 62 of them Fenians — on board the Hougoumont from Portland in October 1867. They arrived at Fremantle in January 1868, the last convicts to be sent to Western Australia. Their arrival also signalled the end of the convict era in Australia.

O'Reilly eventually joined a work party near Bunbury. During 1868 he developed a close relationship with the local clergyman, the Rev. Patrick McCabe. He confided in the priest his plans to escape, but McCabe dissuaded him from putting them into effect. In February 1869, through McCabe, O'Reilly met Jim Maguire, an Irish settler in the district working on land clearance for the Bunbury racecourse. Maguire was able to quickly organise passage on board an American whaler that was replenishing its supplies in the area. What O'Reilly went through before being taken on board the whaler is another very interesting and entertaining story (Barry: 1992 and 1994).

Eventually O'Reilly made his way to Boston in the USA where he became a respected citizen and editor of The Pilot newspaper. In 1869 the British government granted conditional pardons to the remaining 'civilian' Fenians in Western Australia, but they were not permitted to return to Britain until their full sentences had expired. This left eight 'military' Fenians still languishing in Fremantle Prison. O'Reilly continued to show an interest in them.

During the ensuing years O'Reilly continued to press for something to be done to help these men escape to the USA. By 1875 the Clan na Gael (America's Irish Republican Brotherhood, including O'Reilly) had managed to raise sufficient funds from the Irish, both in America and in the Eastern States of Australia, to finance a daring plan involving the Fenians effecting the rescue of their compatriots from imprisonment at Fremantle.

They bought a cargo ship, the Catalpa, from a company in New Bedford, Massachusetts, for $US5,250. They spent a further $US15,000 refitting the vessel as a whaler. It was registered to John T. Richardson's whaling company. On Thursday 29 April 1875, it sailed from New Bedford, for the Atlantic whaling grounds.

George Anthony (John Richardson's son-in-law) was captain of the vessel, and at first only he knew what its ultimate mission was to be (later he shared this knowledge with the first mate, Samuel Smith).

At the end of October 1875 it put in to Fayal, in the Azores, where it discharged 210 barrels of sperm oil from its whaling operations, took on stores and replaced some faulty navigational equipment.

Desertion by crews during port calls was a common occurrence in the 19th century. The crew of the Catalpa proved no exception, deserting at Fayal. This allowed a new, undocumented, crew to be recruited. Eventually the vessel sailed for Bunbury.

In February 1876, during the voyage to Bunbury, they met the trader Ocean Beauty out of Liverpool bound for New Zealand. Anthony went on board and learnt of the coincidence that its captain had once been master of the Hougoumont (the convict ship that transported the Fenians to Fremantle in 1868). When Anthony explained that he was thinking of whaling off the WA coast, the Ocean Beauty's master provided him with copies of valuable navigational charts of the waters.

On 29 March 1876, the Catalpa berthed at Bunbury, and Captain Anthony sailed to Fremantle on the coastal steamer the Georgette with the Fenian agent John Breslin. Breslin's and Thomas Desmond's tale of how they successfully posed as businessmen in Fremantle, so as to gain people's confidence and establish lines of communication, is yet another fascinating sub-plot to the main story (Erickson 1983). Finally, it was arranged for contacts to be made with the eight Fenian prisoners who were to be in work parties outside the Prison, telling them when the escape was to take place (unfortunately, two missed out on the escape because they were confined for insubordination).

Everything now depended on when the ship could sail. Captain Anthony had a shock in store for him: when he came to send the crucial coded telegram containing the date of his departure, he found Bunbury telegraph office closed for Good Friday (something they had not accounted for in their original planning). Luckily he was able to locate the telegraphist and persuade him to send the message. Fortunately the Fremantle telegraph office was open for business at the other end to deliver it. The plan to bring six Fenian prisoners, escaped from Fremantle Prison work parties, to Rockingham, then by longboat to the Catalpa was set to be put into effect on 17 April, Easter Monday.

The escape of the Fenian prisoners involved good organisation, good communication and good planning. Basically, the six of them effected their getaway using two horse drawn buggies, driving them to Rockingham where James Bell, a worker with the Jarrah Timber Company, saw them arrive at around 10 am. He asked them what should be done with the horses and carts they abandoned on the beach. When they replied that they did not much care what he did, he decided to ride to Fremantle and alert the authorities, arriving there at 1 pm.

The water police sent their fast police cutter to Rockingham. They arrived just in time to observe the Catalpa's whaleboat heading towards the horizon. The cutter returned to Fremantle where its coxswain, Mills, reported that they needed assistance. The coastal steamer Georgette, still in port, was commissioned to help in attempts to recapture the escapees

The mobility of the Catalpa, designed to maximise its chances of avoiding apprehension, made it difficult for the whaleboat to rendezvous with it easily. As a consequence the longboat sighted the mother ship in the distance at 5.30pm, but by 7pm a squall caused them to lose contact in the gathering darkness. This meant that the crew and passengers of the open boat were forced to spend an unwelcome, uncomfortable and unscheduled night at sea.

Both the cutter and the coastal steamer returned to the Rockingham area the following day, Tuesday 18 April. The Georgette carried a force of Pensioner Guards commanded by Major Finnerty. But the Superintendent of Water Police, J. F. Stone, was in charge of the whole operation.

They began searching for their quarry, and the Georgette eventually made contact. Stone hailed the Catalpa and requested he be let on board to check for escapees (at this time the pursuers did not realise that the men on board the luckless whaleboat were still at sea). Anthony denied their request. At this point the Georgette, running low on coal, was forced to break off the engagement and return to Fremantle for fuel.

By 2 pm the refueled Georgette, back in the area, spotted the whaleboat fast approaching the mother ship, and gave chase. The escapees eluded them and were hauled on board the Catalpa which set sail immediately, heading for the open waters of the Indian Ocean with the Georgette following in close pursuit.

It was not, however, until 8 am Wednesday 19th April, the following day, that the Georgette, now also armed with a 12-pound howitzer canon on its front deck, overtook its quarry, calling upon it to stop, and firing shots across its stern and bow. The Catalpa hove to, but its master claimed they were in international waters under the American flag, and challenged the police Superintendent to create a diplomatic incident if he dared (Britain had just lost a 3 million pound case involving a similar situation with an American ship). Stone, uncertain whether they were in international waters or not, felt he had no choice, and reluctantly let the Catalpa, with the escapees on board, sail away.

In August 1876 the Catalpa, after trying unsuccessfully to hunt whales for a short period, arrived triumphantly in New York, carrying the Fenian escapees. She then returned to New Bedford. After this episode the Catalpa continued its career as a whaler. Richardson finally sold it in 1884.

Carr, Jack. 'The great escape: Incredible jailbreak of six Fenians from Fremantle in 1876'. Article in 'The Big Weekend', The West Australian 19 November, 1994, p.5.

Stevens, Peter. The Voyage of the Catalpa. New York, USA: Carroll and Graf, 2002.

Stevens, Peter. The Voyage of the Catalpa. New York, USA: Carroll and Graf, 2002.