Eric Edgar Cooke was the last man to hang in Western Australia. Between 1958 and his capture in September 1963, Cooke committed 22 murders and attempted murders that forever changed the face of Perth from a friendly big country town to a city of suspicion and fear.

His fantasies and delusions led him to commit a series of sexual perversions and crimes, including theft, deliberate hit-and-runs,vicious attacks on women in their beds and murder – by shooting, stabbing and strangling.

Broken Lives made Australian legal history, proving that two innocent men, John Button and Darryl Beamish, went to jail for two of Cooke’s crimes and bringing Estellle Blackburn a Medal of the Order of Australia. 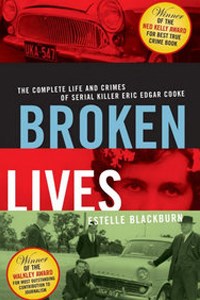