In 1982 an ingenious swindle at the Royal Perth Mint nettled a fortune in gold bullion. Police turned up the Mickelberg brothers, Ray, Peter and Brian who were sentenced respectively to 20, 16 and 12 years jail.

When the Mickelberg Stich was first published in 1985, it was an instant sensation. Almost overnight, powerful forces who did not wish the truth to be exposed, stood up to ban its publication and distribution.  They used every method at their disposal to ensure that their dark secrets stayed hidden.  Over the next decade the author, who is both an investigative journalist and a publisher, fought over 75 court cases and was in court for over 1,200 days to fight the powers arraigned against him. In the end he won. 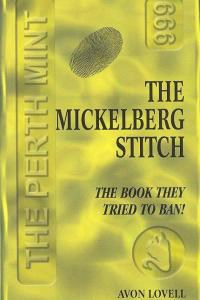